Click here for a 1916 photo of the mill (it had ceased functioning by then) courtesy of the Oakville Historical Society. Here's the entire photo, with margin notes.

Wildlife 1830s   (#2)
The wolves that were so plentiful in the back country frequently followed the valley of The Sixteen almost down to the village, and could be heard howling at night in the vicinity of the mill.5

In the Spring, the Sixteen abounded with Atlantic Salmon; in fact, one eighteenth-century French map shows it as "Rivière au Saumon". The fish ran up the St. Lawrence into Lake Ontario in great numbers to spawn in rivers and creeks, where they were taken in large quantities. Weighing from fifteen to eighteen pounds, the salmon were easily caught, a night's catch sometimes filling eight or ten barrels. When salted down the 200-pound barrels sold for 30 or 35 shillings each.6 Fishing in The Sixteen is thus described by Mr. Warr (an Anglican clergyman):
"The mode of fishing practised by the Indians is exceedingly interesting. The operation is carried on at night; two men generally steal along with the utmost caution in their canoe; the one uses the paddle, the other the spear; the former sits in the stern, the latter stands at the bow of the boat; the invariably carry a large piece of pine lighting in a grate which is so arranges as to cast a strong glare upon the water and enable the spearman to see the fish which he strikes with his harpoon with an unerring aim, and instantly throws it into the boat..."

The salmon stopped running during the 1840's..., perhaps because of reckless slaughter and the contamination of the water... by sawdust from sawmills.5


Muskets 1830s   (#3)
The section of Oakville along Dundas Street (Trafalgar Road) between George's Square and the mill, and east through Anderson's Bush, is described by a resident in the 1830s as "the place where we gathered in the spring and fall with our old flint-lock muskets and shotguns, to fire at the millions of wild pigeons which used to fly over the town".7 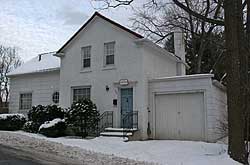 It's likely that Samuel Lawson and his family were the first to settle so far north of the village proper, as no other houses existed between theirs and Potter's at Sheddon Street at the time (1837). Wanting to build a house for his family but unable to finance both the purchase of land and a house,.8 he obtained from Wm. Chisholm title to park lot K, for which he was to pay when he could. He built a one-and-a-half story house of hand-made brick (the first in Oakville) on the property, facing Trafalgar Road and surrounded by an apple orchard. Over time the street bordering the property on the north became known as Lawson Street.

As it happened Lawson never succeeded in paying for the land, and knowing this, his last descendant willed the property to a grandson of William Chisholm. The house stood vacant for some time, and there was little left but the brick shell to use in the significantly renovated structure that exists today, now facing onto Lawson Street and bearing the municipal number 280. The apple orchard of course is long gone, occupied instead by several houses.
The Breweries 1840   (#5)
Whisky and beer are by-products of the grain business. The Oakville Brewing and Distilling Company began operating in 1836 on Walker Street, overlooking the harbour. One of Oakville's leading industries during its short existence, it distilled sixty gallons of whisky a day.

Another brewery soon started up close to the river bank on Dundas Street (Trafalgar Road) at Division (MacDonald) Street - the steam brewery - of which James Brown was proprietor in 1858. About 1863 Henry Hogben took over this business, which later became "Mr. Townsend's Brewery". When Francis J. Brown became proprietor, about 1870, he called it the Victoria Brewery.9 It ceased operation in 1870, and four years later became the new Chisholm basket factory (see "Strawberries & Basket Factories" below) . Hence that stretch of Trafalgar from south of MacDonald to 6th Line was often referred to as Basket Factory Hill.
Trafalgar - A Toll Road! (and the Tollkeeper's House - 293 MacDonald) 1850   (#6 and #7)
Donald Campbell (a tailor) was given the position of keeper of that toll-gate. He purchased a lot at the northwest corner of MacDonald Road and Reynolds Street (now 293 MacDonald) for £100 (approximately $400) and built his home there.

Some 150 years later, the home's windows have retained the original six-over-six sash as well as the original shutter blinds, and a later addition to the rear of the house integrates well with the original stone tail. The two-story front facade is unique in that it displays a fine pattern of Flemish Bond with a cornice of decorative brick work and brick returns at the eaves. The lower story at the rear and on the two sides, like the foundation, is constructed of roughly laid river stones.10
As an aside, Trafalgar Road has had many names over the years: Dundas Street., River Road, Station Road, Basket Factory Hill (S. of MacDonald to Inglehart), and , simply, Toll Road. 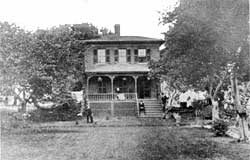 Across the street from Lawson's house, at 279 Lawson Street, is the "Mariners' Home", built in 1862 by Captain Robert Wilson. It earned that title because of the owner's custom of giving a home to ill and homeless sailors during the winters. Captain Wilson was also loved by many black people whom he had helped to escape slavery during the U.S. Civil War, giving them space as stowaways in his grain vessels returning from the U.S.12 (See also the following item #21).

Originally the house, facing Station (Trafalgar) Road, overlooked a spacious lawn and garden. The lawns are still there, along wtih driveways for two other homes. To the left of the house in this photo remains a lovely expanse of lawn and garden.

In the early 1900s this was the home of John Kelley who, amongst other things, was the Mayor of Oakville. 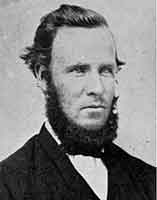 The Town of Oakville was the gateway to Canada for many African Americans, as early as the 1830s.

Ships from Oakville sailed throughout the Great Lakes and beyond, and many slaves were assisted by ship captains to stow away in grain vessels.

"Particularly well remembered is Captain Robert Wilson (see item #9 above), who brought many African Americans to Oakville concealed aboard his ships. For years following the American Civil War (1861-1865), African Americans would come to George’s Square to celebrate Emancipation Day, and those who had been helped by “Captain Robert” would visit him at his nearby “Mariners Home”, which still stands at 279 Lawson Street."24

"Stories are also told of a tunnel which ran from the Sixteen mile creek to the Herb Merry House on Trafalgar Road..."24 If you know anything about this, or would volunteer to find out, please let us know!