Health Care As It Was (page 2)

Health Care As It Was (page 2)

"LAKEHURST GOLD CURE -
The house is luxuriously furnished, and, taken all in all, there is not a more delightful spot in Canada than "Lakehurst". The company claims to be the pioneers in Canada of the gold cure movement, their first sanitarium having been established at Grimsby in 1892. Their present quarters are in every way fitted for the purposes to which they are devoted. The Grand Trunk railway and the lake steamers give easy access, and the inmates enjoy perfect quiet, pure air and skilful treatment. The fact that four-fifths of those now in attendance were influenced by former patients to come is the best possible evidence of the character of the institution. The treatment, down to the minutest detail, is directed by a skilful medical practitioner, whose professional efforts have been attended in all cases with the happiest results. The company has an office at room 35, Bank of Commerce building, Toronto, where also all information can be obtained. A view of Lakehurst accompanies this article." 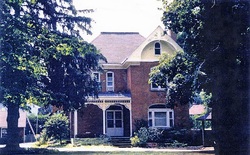 Taylor Nursing Home c1930s
The Taylor Nursing home, a red brick, two storey building on the corner of Eighth Line (Chartwell Rd.) and MacDonald, was operated by Jane Taylor and her husband Frank in the 1930s and 40s. There were six bedrooms used principally for maternity cases although, when available, they were sometimes used for convalescents.

During this period a patient requiring surgery had to be rushed to Toronto. Unfortunately in serious cases the patient might not survive the trip that took over an hour. And so, throughout the war years and immediately after, there was much talk about a hospital for Oakville.
In 1944, a group of civic minded citizens banded together to form the Oakville Trafalgar Memorial Hospital Association and raised more than $100,000 to build a new hospital. However, it was felt that construction costs might come down and that it was inopportune to proceed with building plans.
Although a significant benefit for the community, there were many features that left much to be desired. The elevator was constantly breaking down, whimpers from the nursery at feeding time could be heard throughout the building and there were no oxygen tents available.