Phone: 905 844-2695
Labour of Love:
Reflections on the Oakville Children’s Centre​
By Patricia Stephenson
​ 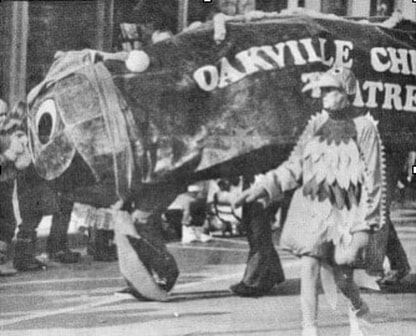 ​​When no performing arts theatre for children existed in their hometown of Oakville, three families, each with young children — Lois and Greg Munz, Jill and Ron Planche and Kathy and Denny Crowe — decided to make it happen.
Lois Munz recalls when friends Jill and Ron Planche proposed a plan to establish a family-focused “theatre presenting company,” an organization that would hire professional performers to entertain young audiences. It was autumn of 1977. The newly built Oakville Centre for the Performing Arts had opened in October of that same year with programming geared to adult audiences. “Ron, as Regional Councillor and a member of the Oakville Centre Board,” she says, was keenly aware that there was nothing in the works for children’s programming. Yet, she adds, “Ron and Jill thought that the 485 seat Oakville Centre was ideal for kids.”
“The Planches had combined business and theatre experience,” says Munz. She adds that Jill worked for the Canadian Opera Company as “executive assistant to the general director,” and “Ron was a marketing professional.” The Planches determined that the purpose of the new company would be to bring the best in children’s professional performance to the Oakville Centre for the Performing Arts. Performances would include theatre, dance, music, individual artists and well-known children’s performers. And to encourage family attendance, all tickets would be one price and kept as low as possible. Yet, beyond the plans, says Munz, neither family had the financial resources to contribute to a new business. However, the Planches “felt [that] with most of the work being done by volunteers and with grants and fundraising possibilities,” they could make a go of it. This plan required that the company founders, whose responsibilities would include the management and running of the organization, would work as volunteers. After much discussion, including an assessment of the risk, the Munz family assured the Planches they would contribute “in any way they could.”
When the Planches put forward their proposal, Lois Munz was on leave from teaching to stay home with her six-month-old baby and three-year-old son, while taking university courses in the evening. She recalls many times working on assignments well into the early morning hours. Teaching qualifications were changing, she says, and it was necessary to upgrade if she wanted to return to work as an elementary school teacher (which she later did). Her husband and the Planches weren’t flush with spare time either — they all had full-time jobs.

The launch:
By early 1978, the newly founded Oakville Children’s Centre (OCC) was registered as a non-profit corporation. While performances would be presented at the Oakville Centre for the Performing Arts, the OCC would operate out of the founder’s homes. During OCC’s first few years, friends Kathy Crowe (owner of Blackbird Graphics) and her husband Denny, joined the Planches and the Munz family team.
The performance season for the Oakville Children’s Centre stretched from October to April, with a break at Christmas. Performances were held on Sunday afternoons, and occasionally on a Saturday. A “top-billed show” would perform twice on the same day — in early and late afternoon. Lois Munz says that by “the 1981-82 season . . . approximately 30,000 patrons” attended the performances.
Greg Munz says that “months of work went into bringing so many shows to Oakville for the theatre season. And it was all done by volunteers.” He recalls attending “showcases” with the other OCC founders, “where theatre groups would present excerpts of their best work to an audience of folks who might hire them.”
In the early years, while mail-in ticket orders went to the Planches’ home address (also known as the Oakville Children’s Centre box office), the Munz family home phone number was used for phone-in ticket orders. Greg Munz took the orders. (His wife and Jill, he says, mailed out the orders.) He recalls the overwhelming surge in ticket sales every fall, when the Halton and Peel school boards sent OCC brochures home with the school children each September. He says, “This is when our kitchen phone began to ring right off the wall!”
“For a few seasons,” says Lois Munz, “Jill had arranged for tickets to be sold at The Bay in the children’s department at Oakville Place.” In exchange, The Bay received free advertising of its children’s clothing in the OCC program. That arrangement required a volunteer though and in time was discontinued. “Eventually,” she says, “the Oakville Centre for the Performing Arts box-office took over the ticket sales completely. What a relief!”
Lois Munz describes an overview of the responsibilities divvied up between the three founding families. She was “in charge of recruiting volunteers, organizing them and communicating their responsibilities to them.” Her duties also included “conducting tours of the theatre facilities after most performances.” She says that Jill took on the financial end of the business, as well as managing the programming and bookings of productions from all over Canada, (occasionally from the States and once from Poland). Ron contributed his marketing expertise. For the first few years, says Munz, Kathy designed the brochures and tickets, and took care of the printing, then Ron took over the design work.
On theatre performance days, says Munz, her husband Greg, Ron and Denny, prepared McDonald’s orange drinks, sold cookies, and tended to the cash. They also worked as stage-hands, and on rare occasions, they were asked to fill-in with non-speaking roles on stage. At times, the men took on the role of “dresser,” she says, “to help the actors get into and out of their costumes, sometimes very quickly, to change from one character to another.”

Fundraising and promotion:
Although the Oakville Children’s Centre received grants, Lois Munz says that continual fundraising was necessary to encourage individual and corporate support, and to keep ticket prices low. She says she credits Jill’s outreach efforts to businesses within the community, which resulted in generous financial backing.
When Oakville’s Midnight Madness began in the early 1980s, the Children’s Centre founders jumped at the opportunity to fundraise at the event. They set up a tent, a couple of barbeques and sold sausage on a bun. The fundraising went “quite well for a few years,” says Greg Munz, until a flood of other vendors and main street restaurants caught on to the idea.
The Oakville Children’s Centre founders looked for novel ways to promote the organization. It was during such a discussion between Greg Munz and one of the OCC board members (who worked for a billboard company), that led to the creation of the “Christmas Caterpillar.” Munz, who was instrumental in building the caterpillar, says it was constructed using copper pipes, hula hoops, and other materials. The Christmas Caterpillar made its debut at the Oakville Santa Claus Parade to a packed crowd of thousands. The giant smiling lime-green caterpillar, with saucer-like eyes, wearing a Santa hat, strutted along the parade route. Accompanying the caterpillar, he says, was his wife Lois, “dressed up like a bird handing out brochures . . . [and] interacting with the children watching the parade.”

On stage surprises:
On occassion, there were surprises during performances — it was live theatre after all. Lois Munz recalls when “the broom of one of the witches caught [on] fire. Fortunately, the fire was extinguished immediately but the smell of burnt straw hung heavy in the air.”
Greg Munz tells the story about a role he played on stage that received a surprising response from the audience. He was a fill-in for one of two stretcher bearers — and someone neglected to tell him that only one side of the stretcher could carry the weight of a person (because of a locking mechanism). No sooner had an actor flopped onto the stretcher than it immediately folded in half. The other stretcher bearer realized at once what had happened and managed to lift his end of the stretcher high enough to prevent the actor from hitting the floor. The actor, sandwiched between the two halves of the stretcher was carried safely across the stage. The audience, unaware of the near casualty, roared with laughter.