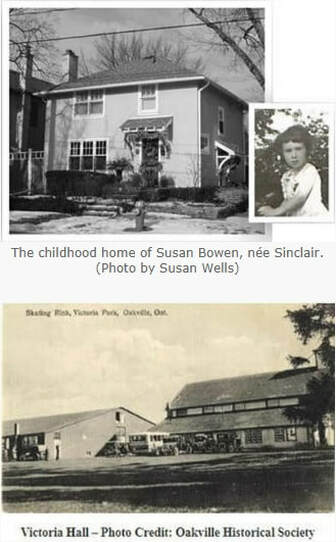 Click on pictures to enlarge.
My father and mother (a British war bride), and their young son David, moved from England to Northern Ontario in 1946 where my father worked for Ontario Hydro and where I was born. In the summer of 1949 we moved to Oakville. It seemed like a natural place for my father to settle after growing up in Clarkson, then attending Oakville Trafalgar High School.​

My first and fondest memories are of our home on Allan Street, where my two brothers and I began our formative years. Our house was a square, white-stucco two-story, located at the corner of Palmer Avenue and Allan Street. My bedroom upstairs overlooked these streets, and from there I could watch the comings and goings of neighbours and friends.

​​​We had a tall floor-model radio that stood beside the large fireplace in our living room. There was a children’s program that I liked to listen to during the lunch hour. One year on my birthday, I was asked to sit still in front of that radio. Unbeknown to me, my mother had sent in my name and birth date to the radio station. What a surprise to hear the radio announcer call out my name and wish me a Happy Birthday!

​​I recall the basement in our home as a curious place of smells and sounds. Rickety old wooden stairs led down to the basement, where the big coal-burning furnace stood, its heating ducts reaching the ceiling. The coal was stored in a separate room. A chute was put through a small window into the coal room and the coal would come tumbling in, billowing black dust. For us children, this was entertainment.
​ ​
​Our basement also served as a wine cellar when my parents made wine with grapes collected from my grandfather’s farm in Clarkson. I remember a big wooden barrel. From a small hole at one end of the barrel, a red cloth used as a stopper resembled a tongue hanging out. And I remember the wonderful aroma that emanated from that barrel.

A favourite place for my friend Michael and me to play was in the storage cupboard located in my bedroom, directly above my bed. We’d climb onto the bed headboard, and haul ourselves up and into the cupboard through its small entry door. The cupboard was cozy, about four by six feet, and very dark. We would pretend that the cupboard was an airplane and that we were flying. Then, just before it was about to crash, we would toss open the door and leap onto the bed below. This game kept us happy and entertained for what felt like hours.

​On one occasion, our game of make-believe didn’t go over too well with my grandmother who was visiting us from England. Once when she was looking after us, my brother David and I decided that we would go “boating” down the stairs. We got cushions from the living room sofa, used them as our raft, and flung ourselves down the stairs. Our shrieks of joy alerted my grandmother who immediately put an end to that activity.

The location of our home was perfect for children with an adventurous spirit. From where we lived, we could walk everywhere. David and I walked to St. Jude’s to attend Sunday school. There didn’t seem to be a lot of adult supervision in those days. On Saturday mornings, we children would walk into town to the Century Theatre. At times, a magician would entertain us before the film was shown. I especially enjoyed watching The Three Stooges. The theatre also held a “best costume” competition at Halloween.

​I shopped with my mother at Morley Keegan’s to buy shoes, and at The Gwendolyn Shop to buy our “smalls.” And we often walked to the beautiful stone library on Lakeshore Road, where we were encouraged to bring books home.

​I especially liked the autumn when my father, sporting his trilby hat, raked the leaves into huge piles and Michael and I would fling ourselves onto them. Eventually my father would rake the leaves to the curb and light them. I still remember the wonderful aroma of those leaves.

​​​A big part of our social life took place at Victoria Hall on Reynolds Street. I remember the inside as a big barn-like structure with a high ceiling. There was a stage, and little rooms where I took craft classes and my mother took a pottery class. My parents went to dances there. They were also involved with a community group that held amateur plays every year for children. When the play A Midsummer Night’s Dream was held there, David played the part of a huntsman and I was a lady-in-waiting.

I recall my Brownie ceremony at the little Boy Scout hut on Randall Street. Inside the one-room building was an arbour. I stood at one end of it, the leader stood at the other. I waited for her to ask me the question I had been waiting for.

“Brownie, by what right do you come?” she asked.

“By the right of my golden hand,” I replied.

​Then I passed under the arbour and became a Girl Guide.​

​​My education began at Miss Lightbourn’s School on Reynolds Street. Then I attended Brantwood School, a short walk down the street from where I lived. For me, it was an exciting place, a friendly place where I could meet other children and play. We’d often play on the swing set behind the school​.

In fourth grade I attended Central School, a red-brick building that was located where the Central Library now stands. I was given directions on how to get to school. I was not to walk along the main street downtown. It was quite a hike for a young child, and yet we had to come home for lunch. On one occasion I must have been dawdling, because when I returned to school after lunch, I discovered the doors were locked. I had no choice but to return home and tell my mother that I couldn’t get into the school. She was not very pleased with me to say the least.

The other thing I remember about Central School was that it had a Curling Club. We used make-shift curling rocks constructed from cut-off coffee tins filled with concrete, with a handle stuck in the top. A little curling rink was in front of the school and I was part of the curling team.

I loved those schools.

There were a lot of places for children to play in those days and we were given a lot of freedom. We would wander around the neighbourhood, unsupervised, even at such a young age. To my young mind, Oakville was just the best and friendliest place to live. In 1956 we moved to the west end of Oakville. It was a nice home but it didn’t hold the magic of that house on the corner of Allan and Palmer.


Susan Bowen recently joined the OHS and is currently working with Memberships. ​